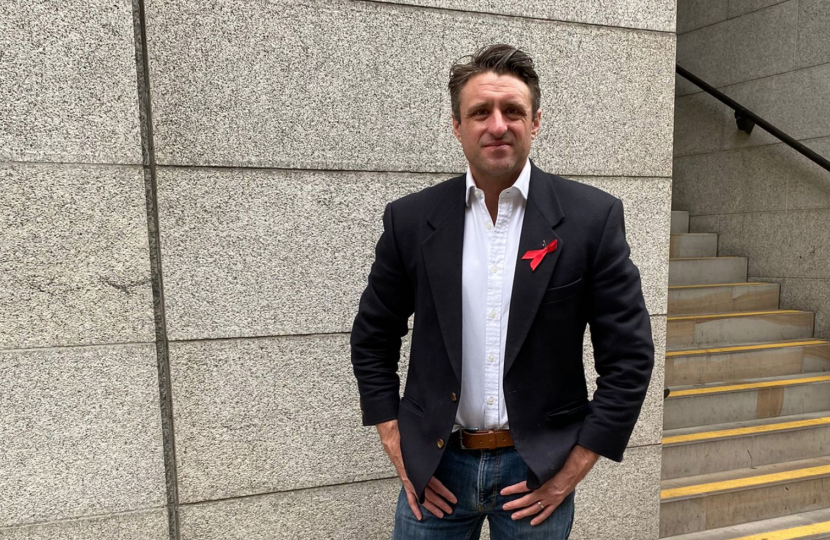 Ben Everitt, the MP for Milton Keynes North, is helping to raise awareness and support for people living with HIV by wearing the universally recognised red ribbon on World AIDs Day 2021 as the Government announced a new HIV Action Plan.

Today the Government launched its action plan which is backed by over £23 million of funding and aims to reduce new infections by 80% by 2025 and end infections and deaths by 2030.

Current HIV prevention methods are working – with a 35% reduction in new HIV diagnoses in England between 2014 and 2019. This represents one of the biggest decreases worldwide.

The action plan, which has launched to mark World Aids Day, will:

Ben Everitt MP said: "I'm delighted the Government has set out its action plan to end HIV transmission and deaths which will be so transformative to people's lives all over the country.

"We want to make sure people can live happier, healthier lives and we've already made great progress but together with this new package of funding we can help eradicate HIV transmission altogether."

From today, it has also been announced people who do not have HIV but who are taking Pre-Exposure Prophylaxis (PrEP) medication to protect against potential infection will now be able to join and serve in the Armed Forces with no restrictions.

Urgent work is also underway to allow candidates with HIV, but on treatment and whose blood tests show no detectable virus, to join the Armed Forces.