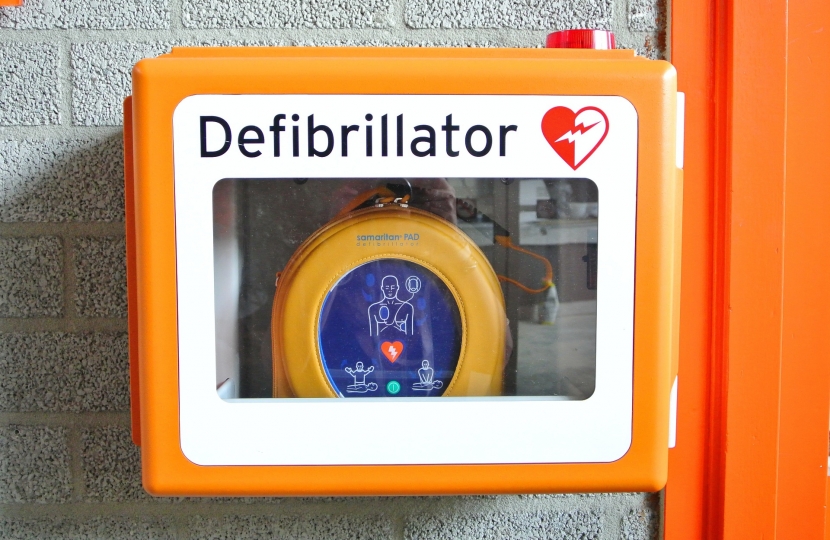 Ben Everitt MP is supporting a call from leading charities and health organisations for defibrillator owners in Milton Keynes North to register their devices on a new national database, called The Circuit, which could help save thousands of lives from cardiac arrests in the coming years.

The British Heart Foundation (BHF), Resuscitation Council UK (RCUK) St John Ambulance and Association of Ambulance Chief Executives (AACE), warn that the UK’s low survival rate is likely to be in part because public access defibrillators are used in less than one in 10 out of hospital cardiac arrests. This is often because 999 call handlers aren’t always aware that a defibrillator is available nearby because the ambulance service hasn’t been told about it. If they don’t know it is there, they can’t direct someone at the scene to retrieve it while waiting for the ambulance to arrive.

To help save more lives, the BHF, RCUK, St John Ambulance and AACE are urging people who look after defibrillators across [constituency] in places such as offices, communities, shopping centres and leisure centres, as well as in public places, to register them on a pioneering database called The Circuit: The national defibrillator network.

While the 14 ambulance services have previously had their own regional databases, The Circuit will eventually replace these with a new national database that lets the ambulance services see defibrillators across the UK once it has been rolled out. This will allow them to direct people to the nearest defibrillator when somebody is having a cardiac arrest, wherever they are.

The Circuit, which is already live in 12 of the 14 ambulance service regions across the UK and will become nationwide soon, could help to save thousands of lives – but it is vital that as many defibrillators as possible are registered on the database for it to work effectively.

Those who own and maintain defibrillators, also called defibrillator guardians, can still register their devices in areas that are not yet live on The Circuit, ready for when their ambulance services come online.

It is estimated that there are tens of thousands of defibrillators which are still to be registered on the new system. To make sure opportunities to save lives aren’t being missed, the organisations are aiming to see 70,000 additional defibrillators unknown to The Circuit registered by the end of the year.

Ben Everitt, the MP for Milton Keynes North, said: "Defibrillators save lives and every second counts when somebody has had a cardiac arrest so providing easier access to defibrillators is vital and I'd encourage anybody who owns one to register their device on the new database.

"The high-profile incident involving Christian Eriksen during EURO 2020 brought cardiac arrests into national focus and we saw how important the use of a defibrillator was in saving his life."

Guardians can register their device on by visiting https://www.thecircuit.uk/