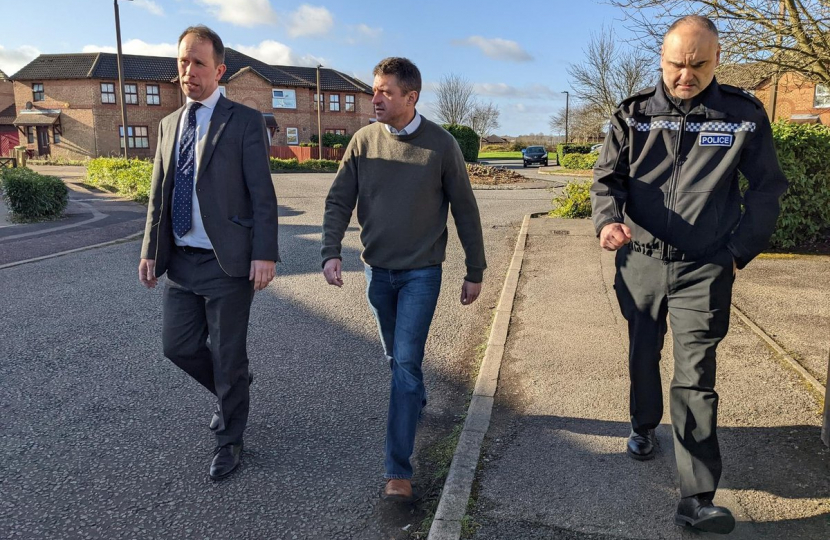 Ben Everitt, the MP for Milton Keynes North, has backed the Police and Crime Commissioner’s new Operation Deter to tackle knife crime across the city.

Ben has been working closely with Thames Valley PCC Matthew Barber, as well as the Home Office and Ministry of Justice, on the issue of knife crime in MK, and recently set up a walkabouts with the PCC and local neighbourhood officers in Oldbrook and Heelands.

Operation Deter will be focussed around Milton Keynes and will see Thames Valley Police adopt a zero tolerance approach to knife possession offences in Milton Keynes for offenders aged over 18, with the objective being that any knife possession offences are proactively charged and remanded to court by TVP while the suspect is still in custody. Following the charge, the custody sergeant will then take a more robust approach to bail. This will set a clear message to those routinely carrying a knife in Milton Keynes, that this will simply not be tolerated.

Additional funding is also being provided to the Milton Keynes Youth Offending Team to pilot a rapid response approach to youth diversion, with an initial meeting with a child taking place within 90 minutes of them being brought into custody.

Ben Everitt MP has been determined to ensure anybody caught carrying a knife in Milton Keynes should expect to be locked up and has welcomed Op Deter’s plan to make this happen.

He said: “I’ve been working very closely with Matthew Barber on tackling knife crime here in Milton Keynes and I’m strongly encouraged by the plans announced for Operation Deter.

“I’ve been saying for a long time that we need to ensure if you are caught carrying a knife on the streets of Milton Keynes you should expect to be put behind bars and this is a big step in the right direction.”