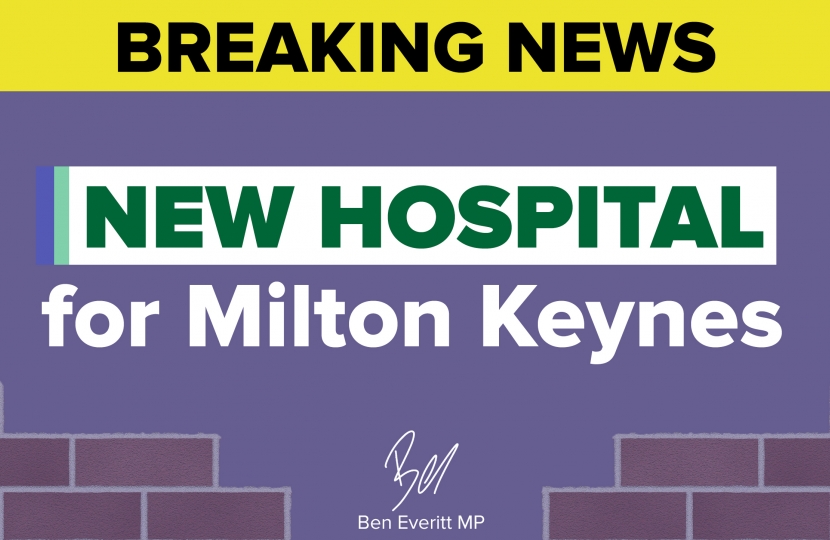 Local MPs Ben Everitt and Iain Stewart have shared their delight after a brand new hospital for Milton Keynes was given the green light by the Government.

The new Women and Children’s Hospital has been confirmed by the Government today after initial seed funding of £1 million was announced last year and a further £7.7 million was awarded to begin preparing last month.

Ben Everitt MP and Iain Stewart MP have been consistently lobbying Health Secretary Matt Hancock both publicly and privately to ensure the multi-million pound funding got the green light.

Ben commented, “I’m absolutely thrilled the new hospital has been given the go-ahead, this is exactly what MK needs to be able to prepare for future demands.

“I’ve been constantly knocking on Matt Hancock’s door telling him how important this is to MK and everyone who lives here so I’m delighted the Government has listened.”

The new hospital for MK is part of Prime Minister Boris Johnson’s £3.7 billion commitment to build 40 new hospitals by 2030, and a further eight schemes have also been invited to bid for funding.

Ben Everitt, the MP for Milton Keynes North, has welcomed an extra £1.2 million worth of Conservative Government funding to help tackle rough sleeping in the city.