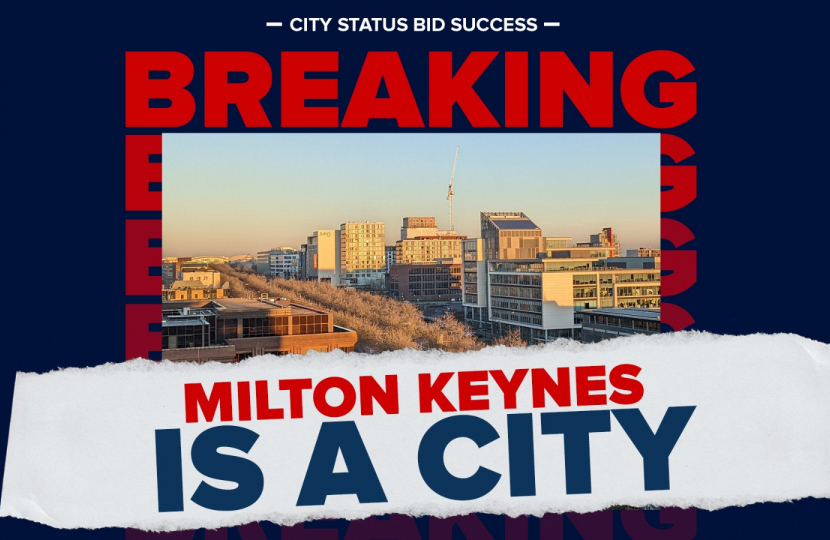 Ben and Iain have been strongly backing MK’s bid to become a city and called on Milton Keynes Council to put in a bid as soon as the competition was announced.

Having both written to Steve Barclay MP, the Chancellor of the Duchy of Lancaster, to highlight the reasons why Milton Keynes deserved city status, Iain and Ben have continued to lobby their Ministerial colleagues in Parliament for the case of Milton Keynes being recognised as a city.

Milton Keynes was one of 38 places across the UK and British Overseas Territories to apply for city status, and it was its fourth attempt after previous applications in 2000, 2002 and 2012.

Winning city status can provide a boost to local communities and open up new opportunities for people who live there, as is the case with previous winners Perth and Preston where the local economies benefited from their improved national and global standing.

Iain Stewart, the MP for Milton Keynes South, commented: “I am over the moon that Her Majesty The Queen has chosen Milton Keynes to be recognised as a city in the year of her Platinum Jubilee

“Whilst I note I may be biased, I truly believe that Milton Keynes is one of the best cities in the world. Where else are you going to find the history of the WW2 codebreakers at Bletchley Park mixed with the future of driverless cars and delivery robots?

“It is an absolute honour and privilege to represent Milton Keynes in Parliament and I am thrilled to have played my part in securing Milton Keynes city status.”

Ben Everitt, the MP for Milton Keynes North, said: “We’ve all been calling it a city for years so I’m absolutely thrilled Milton Keynes has been successful in its bid and will now officially become a city.

“We may be just 55 years old but we’ve got so much history with Bletchley Park and Wolverton Works and looking forward we can become the Silicon Valley of Europe with our innovation and technology with the success of the delivery robots, autonomous car trials and space research.

“We’ve got incredible education institutions in Milton Keynes College, the Open University and the Institute of Technology and as we have seen through the pandemic and now into the Queen’s Platinum Jubilee celebrations we have a truly fantastic community spirit.

“I am proud to be the Member of Parliament for the CITY of Milton Keynes.”