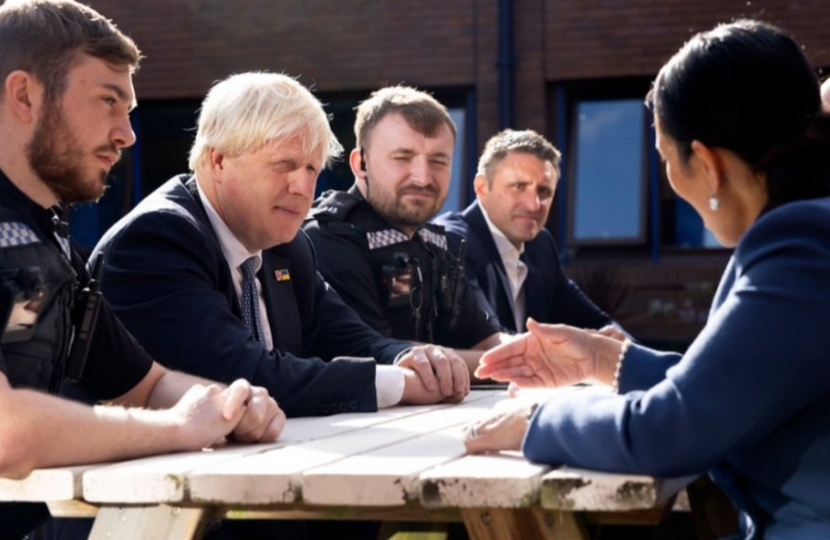 The Prime Minister and Home Secretary visited Milton Keynes police station where they met members of staff and the LPA Commander for Milton Keynes, Superintendent Marc Tarbit, while MK Dons SET were also in attendance to speak about their work in the local community aligned to the wider efforts to prevent crime and violence.

Ben has been working with the Government and local Police and Crime Commissioner Matthew Barber on tackling knife crime in Milton Keynes and it was recently confirmed Thames Valley Police have 442 more officers now than they did in 2019.

Op Deter was set up in July and saw a significant increase in charge and remand decisions in its first month as the force seeks to adopt a tougher new more proactive approach to knife crime.

Ben Everitt MP said: "It was fantastic to have the Prime Minister and Home Secretary in Milton Keynes today to hear about the success of the Violence Reduction Unit and Op Deter as we crack down on knife crime in the city.

"Just before summer recess I was able to raise the issue of knife crime at Prime Minister's Questions and I had also written, with Iain Stewart MP, to Priti Patel inviting her to MK to discuss the issue so I'm absolutely delighted they have taken notice.

"I will continue to make the point that if you are caught carrying a knife in Milton Keynes you should expect to end up behind bars."