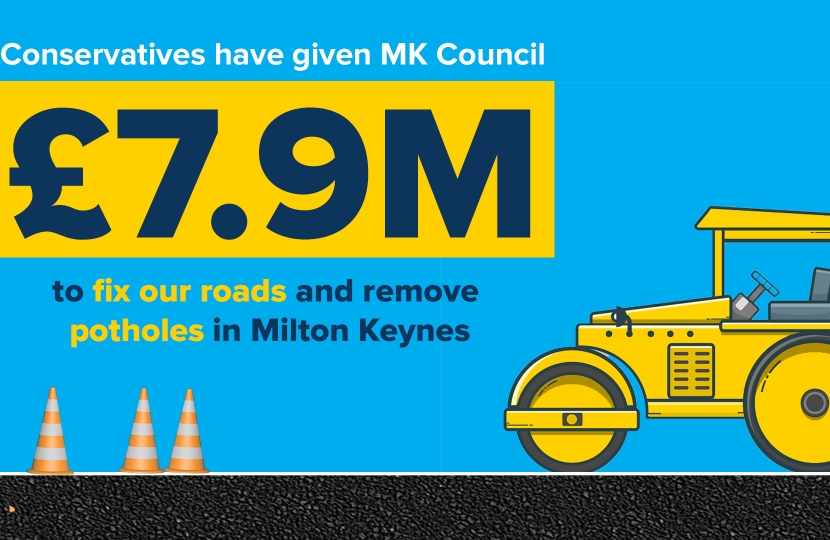 Milton Keynes Council has been allocated £7.9 million for local roads maintenance in Milton Keynes including fixing potholes appearing all over the city.

Across the country the Conservative Government has given councils £500 million which is expected to fix the equivalent of 10 million potholes.

This extra money has been welcomed by Ben Everitt and Iain Stewart, the two MPs for Milton Keynes, and the Conservative Group Leader on MK Council Alex Walker.

Ben Everitt, the MP for Milton Keynes North, said: “I know residents are fed up with potholes damaging their cars and bikes all across Milton Keynes and it’s not just costly and annoying, it’s dangerous too.

“I’m glad the Government is once again providing money to the Council to fix potholes and for other road maintenance in MK and I hope they used the allocated funds as quickly and effectively as possible.”

Iain Stewart, the MP for Milton Keynes South, commented: “"I welcome the Government's announcement of over £7.9 million to fix potholes across Milton Keynes. It has been a harsh winter with existing potholes getting worse and new ones appearing.

"I would urge the MK Council to utilise this funding to make repairs to our roads to ensure the safety of road users."

Alex Walker, the Conservative Group Leader on MK Council, added: “It’s great to see the Conservative government is committed to investing in fixing our roads and removing potholes in our city.

“The Labour-led Council now needs to get on with the job of using this funding to fix MK’s roads and repair as many potholes as possible before the current dreadful state of our roads gets worse."

More than 57,345 people have been given at least one dose of the COVID-19 vaccine across Miton Keynes, it has been announced.

The latest figures, published on Thursday (25/02), include all vaccines given by the Milton Keynes CCG up to Sunday 21st February.