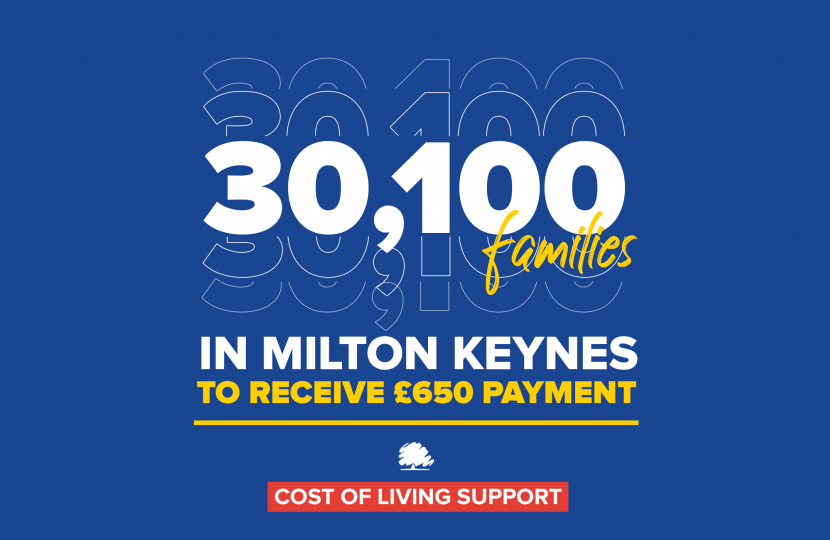 Milton Keynes MPs Ben Everitt and Iain Stewart have welcomed the news that 30,100 families in the city will benefit from the Conservative Government’s £650 Cost Of Living Payment.

These households will receive the first of two cost of living instalments totalling £650 from 14 July 2022, with the second instalment being paid in autumn.

Figures also revealed 20,300 individuals in Milton Keynes are set to benefit from the Government’s £150 disability top-up payment which will land in September.

Ben Everitt, the MP for Milton Keynes North, said: “I understand how tough the global Cost Of Living crisis is for families across Milton Keynes so I’m delighted to see so many individuals and families most in need are set to benefit from this Government’s support.

“With more than 30,000 families receiving the £650 Cost Of Living payment, over 20,000 individuals benefitting from the disability top-up payment and 95,890 households eligible for the £150 Council Tax rebate I hope the burden of the Cost Of Living can be eased.

“This Conservative Government has shown during the pandemic and now that it will act to support those most in need when times are tough.”

This Cost Of Living support is on top of £400 for all households to help with energy bills and in addition to changes to the Universal Credit taper rate and work allowances worth £1,000 a year on average for working claimants and a rise in the National Living Wage to £9.50 an hour.

In further support the Council recently received a further £1.79 million from the Government’s Household Support Fund to support families most in need between April and September.