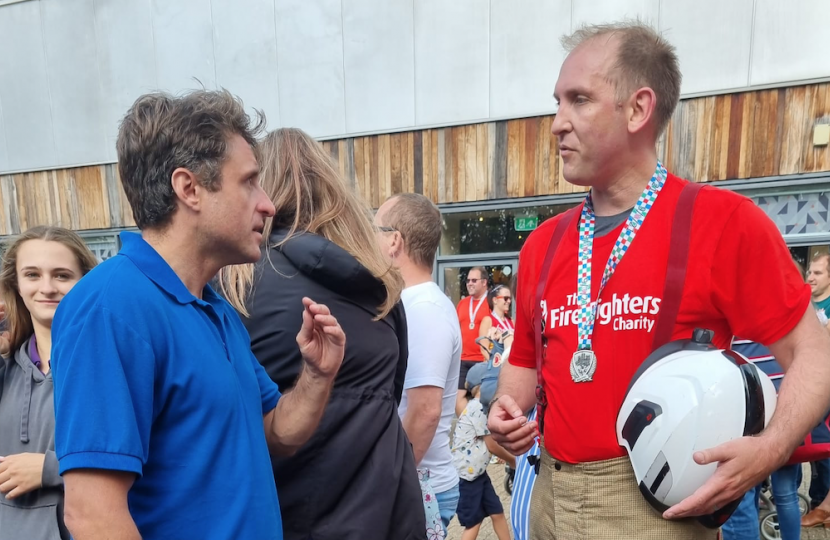 Ben Everitt, the MP for Milton Keynes North, was on hand to greet some fundraising firefighters as they completed their MK Tunnel to Towers charity run on the 20th anniversary of 9/11.

The Buckinghamshire Fire and Rescuey Service firefighters took part in a 6k run wearing full fire kit, all whilst wearing 36kg of equipment to raise money for The Fire Fighters Charity and supporting the Stephen Siller Tunnel to Towers Foundation.

Firefighters made up 343 of the 2,977 victims of the 9/11 terrorist attack in 2001 and Stephen Siller was one of those serving FDNY firefighters who gave his life to save others.

The Fire Fighters Charity offers physical, social and mental health support to serving and retired FRS members and their families within the UK.

The run took them from West Ashland Fire Station, to the Xscape building in Central Milton Keynes and Ben made sure to be there to cheer them on as they reached the final straight - and stayed afterwards to speak to the firefighters who took part.

He commented: "It was fantastic to greet and cheer them on the Bucks Fire firefighters who took part in the MK Tunnel To Towers charity run to commemorate 9/11.

"I think every person can remember exactly where they were on that terrible day 20 years ago and this is an inspirational way to raise money for charities that support firefighters.

"Firefighters gave so much on that day to save others and we must never ever forget that."