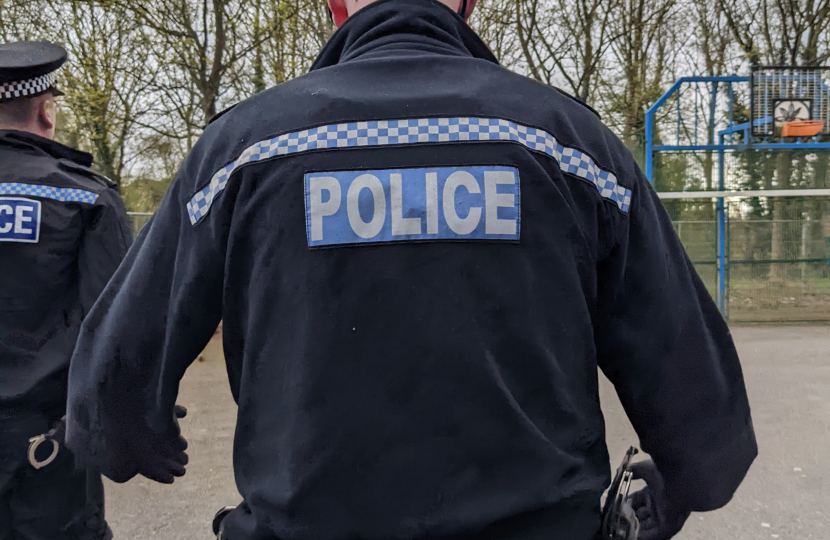 Ben Everitt, the MP for Milton Keynes North, has shared his delight after official figures published today (27/04) showed that 368 police officers have been recruited by Thames Valley Police since September 2019 and the total number of officers is now higher than 2010.

The latest figures are part of the Conservative Government’s drive to get 20,000 more police officers on the street by March 2023, and puts the Government on track to fulfil its manifesto commitment with 68 per cent of the target now met.

Across the 43 police forces, an additional 13,576 officers have been recruited, bringing the total number of police officers in England and Wales to 142,526 – where they are already having an impact in tackling crime and keeping communities safe.

The latest figures also show that the police are more representative of the communities they serve. More than four in ten new recruits since April 2020 are female and nearly 12 per cent of new recruits identify as belonging to a Black, Asian, Mixed or other minority ethnic group.

However, the figures show Labour Mayor’s Sadiq Khan and Andy Burnham, who run the Met and Greater Manchester Police forces, the largest and third largest forces in the country, failed to meet their targets for recruiting additional officers. Sadiq Khan fell 133 officers short of his target and Andy Burnham fell 30 short of his.

The 13,576 extra officers will support the Conservative Government’s crack down on crime, which has seen the launch of the Beating Crime Plan and the passing of the Police, Crime, Sentencing and Courts Bill through the House of Commons.

This builds on the action already taken by the Conservative Government since Boris Johnson became Prime Minister two years ago – including boosting police funding to a record £15.8 billion and delivering £70 million through the Safer Streets Fund to make neighbourhoods secure.

Ben Everitt MP said: "I've been out and about with officers on the streets of Milton Keynes over the last few months in Oldbrook and Heelands and I know just how valuable more police officers will be in helping crack down on crime in our local community.

“The 368 additional recruits mean there are now 4,618 police officers across Thames Valley Police, helping to pursue criminals, keep neighbourhoods safe, and reassure the law-abiding majority. That means when Milton Keynes needs more officers we can get surge support from other areas in Thames Valley.

“These figures also reveal that where Labour are in power, they are failing to deliver. Once again this demonstrates that only the Conservatives can be trusted to keep people safe and deliver on the priorities of the British people”.

Home Secretary Priti Patel commented: “When this Government took office in 2019, we made a promise to the British people to recruit 20,000 extra police officers to cut crime and keep communities safe - and we are delivering on that pledge.

“These extra officers are getting out on the streets helping to cut crime and protect communities up and down the country – and they are reflecting the communities they serve better than ever before, with the highest ever proportion of female officers and officers from diverse backgrounds out there making a difference.

“It is disappointing to see Labour Mayors in charge of some of our biggest police forces failing to meet their targets for recruiting more officers, particularly given how quick they are to tour TV studios demanding more help from the government for their own failures.”

“Our Beating Crime Plan will give these officers the powers they need to stop crimes happening, support victims and keep serious offenders in prison for longer – keeping the streets safer for all.”