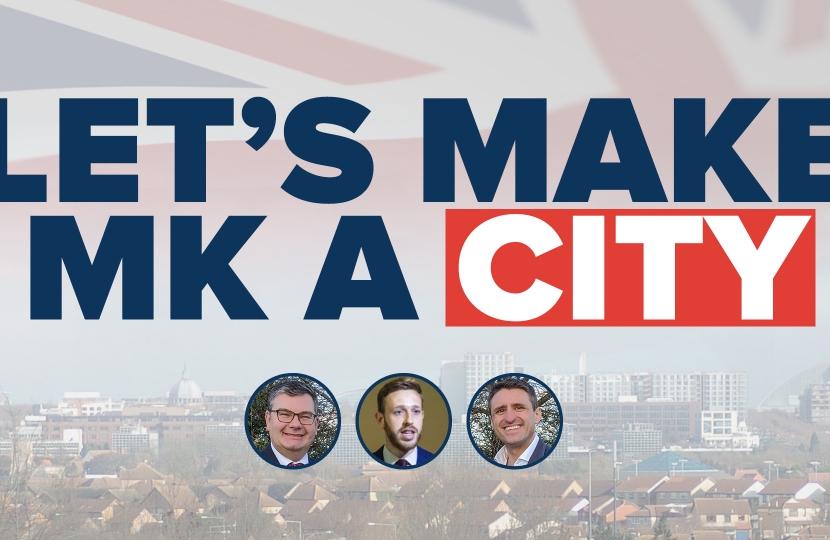 Milton Keynes MPs Iain Stewart and Ben Everitt have called on MK Council to apply for city status as part of a competition for Her Majesty The Queen’s Platinum Jubilee.

The Civic Honours competition has been launched across the UK today ahead of Queen Elizabeth II’s celebrations in 2022 and local authorities can make a case for why its area deserves to be granted city status.

It will be the first time in 10 years the Queen has awarded such honours, with Milton Keynes previously making bids in 2000, 2002 and 2012, and while MK is informally known as a city it still remains a town.

Iain Stewart, the MP for Milton Keynes South, said: “This is an exciting opportunity for MK to gain official city status. Having recently marked our 50th birthday, such an award would help demonstrate to the world that we are such a great place to live. We will work together to put in the best bid possible.”

Ben Everitt, the MP for Milton Keynes North, commented: “This is a fantastic opportunity for Milton Keynes to finally get the city status we know we deserve. Milton Keynes has become a wonderful place to live, work and bring up a family with beautiful green spaces, innovative and ambitious businesses and vibrant, diverse communities.

“I hope Milton Keynes Council will put a strong pitch forward to ensure the new city becomes an official city.”

Chloe Smith, the Minister of State for the Constitution & Devolution, added: “The Civic Honours competition is an opportunity to promote your hometown and win an honour for it that will last for all time. I encourage entries from local authorities in every part of the UK, from vibrant towns and cities with distinct identities, history, and sense of community.

“The brilliance of the United Kingdom is rooted in diverse and unique communities brought together by a shared sense of civic pride, so I have no doubt the competition will be fierce - but success will be a historic moment of celebration for the winners, which will take its place within Her Majesty's Platinum Jubilee.”

Alex Walker, the Leader of Milton Keynes' Conservative Group on MK Council said: "Achieving city status for MK would be an enormous boost and incredible opportunity. We’re a place rich in culture and history, innovation, beautiful green spaces and diverse communities that make MK unique and such a designation would only grow our reputation as a great place to live, work and enjoy life.

"We will do all we can to ensure that MK’s bid for city status stands out from the crowd."

The competition will close on 8 December 2021 and full entry guidelines and an application form have been published on GOV.UK.

All valid entries will receive individual consideration on their merits, before recommendations will be made by ministers to Her Majesty The Queen. The number of awards made across the UK, Overseas Territories and Crown Dependencies will depend on the strength of the applications received.

Her Majesty The Queen will be the first British monarch to have reached 70 years on the throne. This is a truly historic moment for the country and will be marked in a way that recognises the strength of community across the United Kingdom, Crown Dependencies and Overseas Territories.