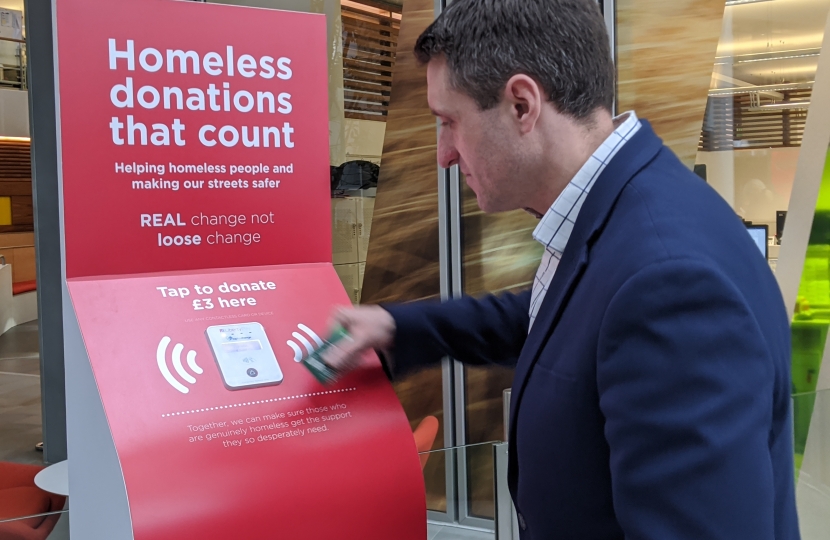 Homelessness is a terrible, terrible issue and we've had problems with it in Milton Keynes so it is top of my priority list locally and back in Westminster.

I'm pleased that since the election the Government provided MK Council with £1,724,847 to help manage homelessness pressures and support those who are at risk of homelessness. Following that funding MK was given a further £870,443 of Government funding to tackle rough sleeping in the town.

Down in Westminster I have joined the All Party Parliamentary Group for Ending Homelessness and have met with CRISIS, the national homelessness charity.

I've also been meeting with local charities such as the Bus Shelter MK, the MK YMCA, the Winter Night Shelter and the MK Homelessness Partnership to talk about how I can support them and discuss how they believe we can work together on the issue.

Alongside this I was pleased to attend the launch event of My Milton Keynes' digital donation points across the city centre. They are currently based at intu shopping centre, Jurys Inn, John Lewis and Network Rail. Their campaign supports MK Homelessness Partnership in their bid to getting people off the streets and into permanent housing and aims to engender a change of giving habits – in the hope that alleviating cash flow should lead to reduced street crime or the cash being misspent.